The Galleria area, also known as “Uptown Houston,” offers prime commercial office space for lease, in a pristine, upscale setting. It is the second-largest business district in Houston (behind Downtown) and the 14th largest in the nation. The area serves as headquarters for successful energy, real estate, financial and professional services.

About Offices In The Galleria

The Galleria in Three Adjectives:

Getting Around The Houston Galleria

When you rent an office in the Houston Galleria, you’re putting down roots in the heart of Houston. Located right outside 610 Loop (with several exits leading directly into the district) and bordered by Highway 59 to the south and Interstate 10 to the north, the Galleria proves to be a convenient location for an office. Downtown Houston is less than 10 miles away. Many destinations in the district are within walking distance of one another, or you can take a taxi, metro bus, or personal vehicle — most Galleria offices for lease have ample parking.

With neighbors like Blue Cross Blue Shield of Texas, Cameron International, GE Energy, Landry’s Restaurants, Clear Channel Communications, Weatherford International and Symantec Corporation, you’ll be in good company when you rent an office in the Galleria. Retail reigns here, with upscale restaurants and shopping making the district a destination for tourists and residents alike. Nowhere is that more evident than the area’s namesake, The Galleria, Texas’ largest mall (and one of the top 10 largest in the nation). Anchored by Macy’s, Nordstrom, Neiman Marcus, and Saks Fifth Avenue, the center attracts 26 million shoppers annually. When it comes to Class A office space for rent, the Galleria offers both style and stability, with year-round occupancy rates consistently over 90%.

Houston Galleria by the Numbers 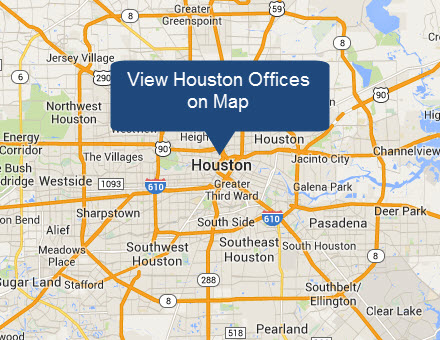